The only way to get to Lasqueti is by passenger ferry, and so you can imagine the surprise when a bear showed up one autumn and started pillaging the apple orchards. Consensus among the island's four hundred residents is that it must have floated in on a log; although some claim perhaps the aroma of island’s sweet fruits prompted it to take a long swim over. Much of the apple harvest was lost to the bear that year, and ultimately someone decided to turn the bear into chili. Sue told me this story from the warmth of her kitchen after my arrival from San Francisco, a twelve hour trip which involved a flight, two long bus rides, two ferries, and a two mile walk. For human beings and bears alike, you have to really want to go to Lasqueti to get there, and generally you should only go if you know someone.

I met Sue through my dear friend Bekah, Sue's niece. I'd heard lots of stories about the green-thumbed, pioneer Sue, who was living on a remote, rugged island the size and shape of Manhattan in the Strait of Georgia, British Columbia. I imagined her seaside farm as a place infused with cold, fresh air and replete with all manners of delicious berries—blackberries, raspberries, boysenberries, thimbleberries-- ripe and dripping off their thorny branches. Upon arrival, that is exactly what I found. Along with the most bizarrely noisy, dreadlocked sheep (they run wild through the island, sounding like barfing old men), pink starfish, bald eagles, killer whales, and tides so dramatic that-- depending on the time of the day-- you can either dive right into the ocean or walk an hour out onto muddy exposed beds of oysters and silky green seaweed. Despite all of this, I was surprised to learn that the whole island lives completely off the grid, with almost everyone even making their own garden fertilizer, by pooping in sawdust-filled buckets. It’s a community of people that Statistics Canada has called the most highly educated in British Columbia, and it shows; this is a community of artists and intellectuals who have figured out that one of the best ways forward for our species might be to take a step back and leave a smaller footprint.

Sue arrived in Lasqueti in 1972, by way of a divorce and a long drive with her two small boys. She was in search of a fresh start and a new way of life, something really different to shake things up. She found that on Lasqueti and has created an impressively productive life there, weathering the unexpected death of her second husband and an early battle with breast cancer, and attentively raising her children, grandchildren, and garden, to become one of the earliest certified organic growers on the coast of British Columbia, a prolific published poet, and now a painter.

Sue is humble and hardworking, and seems unaware of how truly exceptional her focus and creativity is. I, however, was in complete awe of it, and followed her around as much as I could during my week on the island. It was early September, and while all the berries and garden vegetables were still going strong, the real highlight of the week were the Gravenstein apples. An early ripening variety, these apples had just come into season. Sue grows eleven varieties of apples, all of which have different tastes, textures, and applications in the kitchen. The crisp, juicy, complex Gravensteins were her favorite apples and they quickly became mine, too. The week marked the start of the year's apple activities, which typically included making enough sauce, crisps, cakes, apple pancakes, leather, fresh juice and fermented cider to satisfy much of the community.

Sue claims that almost everything she knows about apples comes from the community on Lasqueti. "One neighbor is an expert pruner, so they teach you. Another grows a great variety that still tastes good into the spring, so you plant that in your own garden. We do also talk about world politics and gossip like everyone else around the world, but mostly we discuss practical things like growing tips, off the grid technologies, and rats." As Sue told the histories of her trees she made it very clear that "Every apple has a story." Some were very old, planted around 1930 and still producing well. The Kings are big and tasty eating apples, and store moderately well. The old Transparents are the poorest storers, but are prized because they are the first-ripe, and great for pies and applesauce. A Golden Delicious is great for drying into rings. The newcomers, Cox's Orange and Gala, only do well during a very "on" apple year, as they were planted near the heritage trees and are non-thriving due to how those older trees have changed the soil. And then there are the perfect Gravensteins, whose only downside is that they don't keep. Like many things in life, you have to enjoy those as much as possible while they are here. 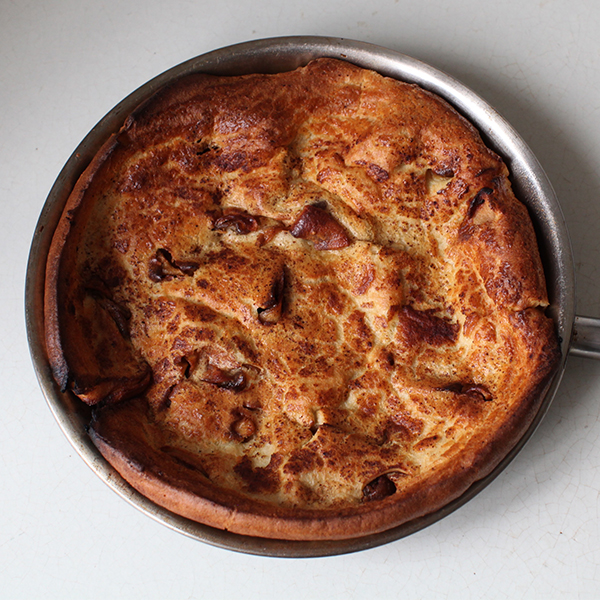 Sue grows eleven varieties of apples on her seaside farm in British Columbia and says that the best apples for this recipe are hard and crisp, so the slices stay discrete during cooking. For her this means Transparent apples in the summer, and Gravensteins or Kings in the autumn. The best grocery store apple to use is the Granny Smith. Softer apples will still taste good, but will melt down and not make as pretty a finished dish. 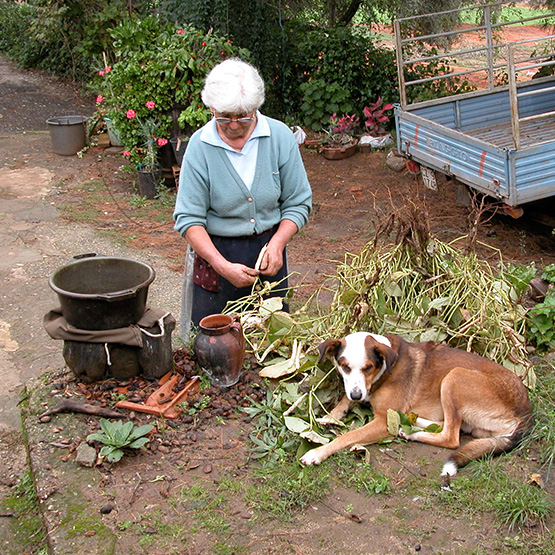