It had been raining. The earth was heavy and wet. In a way this was good; it made pulling the plants out of the ground much easier. But, all that water and gloppy earth also dirtied the beans, requiring more washing later on. We gathered enough plants to shell beans for lunch. This was going to be a very special meal, cooked by the fireside- beans in pignata, and wild greens. A pignata is a terracotta urn with a small handle on each side, and a knobbed lid that rests on top. Carluccia remembered her grandmothers and great-grandmothers cooking the beans the same way, in the same terracotta pignate.

As we worked side by side Carluccia told me she grew her butter beans on two plots of land that are within a stone’s throw from one another. While the earth in these fields had very similar properties, the beans from one always had a richer, fuller flavor than those from the other. Carluccia knew this, and so cooked the milder ones with herbs or meat, to boost their taste. She also adjusted her cooking method according to the stage of the bean’s maturation: if they were moist and plump in their pods, they cooked for a shorter amount of time, and if they were older and drier in the pod, they were soaked for a number of hours before being boiled in almost double the amount of water used for the plump ones. The beans could also be picked very early in the season, and eaten as green string beans. The year’s weather, and the time of harvest, would yield different tastes and textures.

Clean beans and spring water went into the pigante, and the pignate went into the fire pit inside of Carluccia’s stone cooking hut. We made a fire from twigs and crumpled newspaper, and larger branches that Carluccia snapped into pieces over her right knee. Carluccia lit our fire with a laugh, and a purple bic lighter. Once the fire was going and the beans were off to a good start, we closed the door and smoke behind us and headed back into the fields.

Whenever Carluccia made beans in pignata, she couldn’t help but to go foraging for wild edible greens. She was hardwired in this way; shelling beans meant autumn, and autumn meant wild greens. She took me into a pasture, and from what looked to my naïve eye like just another patch of grass, Carluccia began to pluck a variety of leafy plants. They were growing spontaneously, in clusters, and all it took to find them was a knowledgeable eye. Carluccia said that in Italy today “most young people don’t go into the fields anymore to forage. They don’t know how to recognize wild foods.” The greens were particularly abundant at this time of year, when the rains had started and the temperatures were cooler. Their season had begun in October, and would last until May. By June, the earth would be too hot and dry, causing the plants to flower and seed, rendering them inedible.

We collected basketfuls of these exotic, mostly nameless greens. Carluccia described the unique properties and taste of each, although she always cooked them all together. The younger ones were the most tender and delicate in flavor. Others were quite bitter or almost creamy. Some were even sweet. The wild greens were more nutrient dense than cultivated varieties, and the broth left over from boiling them was delicious and very good for the liver; drinking the mineral-rich cooking water was believed to remove toxins from the body. It was nature’s way of cleaning us up.

Smoke billowed out of the cooking hut when we went to put on water for the greens. The pignate were frothing out of their tops, and we used twigs to scrape away this bean foam. Carluccia picked up the scalding hot pignate with her bare hands, and shook them to mix the beans. They were almost done. The water came to a rolling boil for our wild greens, and we added them to the pot with a good dose of salt. A few minutes later we were all gathered at the table, eating beans, greens and olive oil. It was one of the best meals I had in Italy, full of nature’s elements; earth, fire, and water. 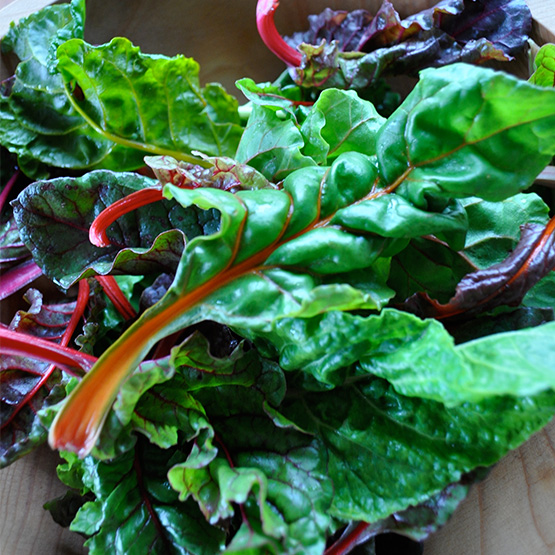 Although Carluccia was not accustomed to cooking in the early afternoon, when I went to say good-bye she pulled these emerald-green polpette di bietola (chard balls) piping hot from her oven. Out came some Tropean red onion marmellata (jam) and a fizzy glass of the family’s red wine to accompany them. It was the perfect, verdant last treat with Carluccia, and she sent me off with an extra paper bag filled with them for the long plane ride home. 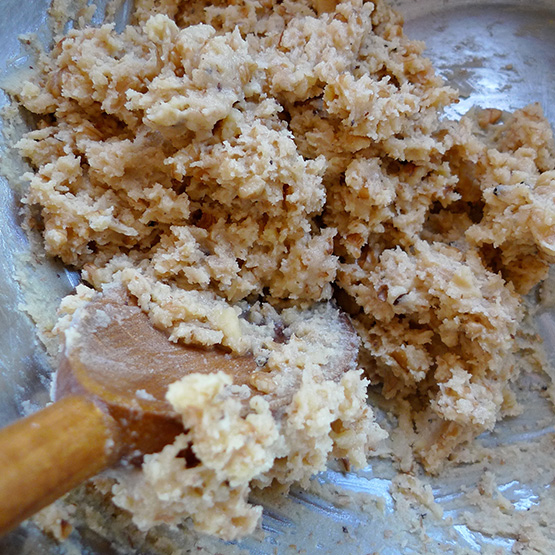 Carluccia loved the earthy, creamy taste of her land’s walnuts; for this cookie I combined their flavor with one of her favorite spices, the black peppercorn, which we foraged for together along Calabria’s wild coastline. The mixture of the peppercorns and walnuts with the butter and honey creates a light, nutty, and ever-so-slightly spicy tea cookie. 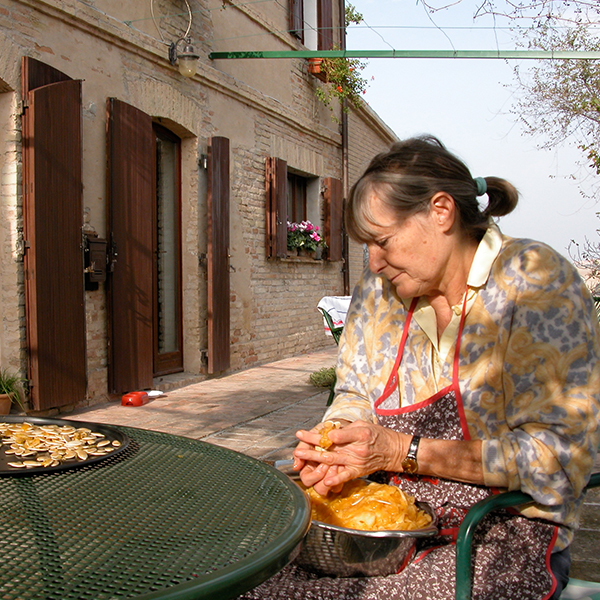 Usha was tender and methodical with her baking. Each day the wooden dough board came out, as did a big knife for cutting butter, and small bowlfuls of ingredients—apples, nuts, plums, and on a rare occasion even chocolate.